Arbitration chronicle: CJEU versus ECHR, the battle for arbitration has begun

With the recent multiplication of interventions by European courts, arbitration is experiencing a form of fundamentalization. This article addresses the Europeanization of arbitration law mainly on the basis of two judgments. On the one hand, the London Steam-Ship judgment of the Court of Justice of the European Union concerning commercial arbitration (CJEU 20 June 2022, aff. C-700/20). On the other hand, the BTS Holding judgment, in which the European Court of Human Rights condemned the Slovak State for failure to enforce an award. > Read article

In a significant decision dated 26 January 2022, the Criminal Division of the Court of Cassation reviewed the principles of attorney-client privilege and extended this privilege to documents and exhibits not directly emanating from lawyers or not directly addressed to lawyers. > Read analysis

The Autorité de la concurrence published his new framework document for the implementation of competition compliance programs. This communication reminds economic actors that compliance obligations are multiplying in all areas ranging from the fight against #corruption to #competition law. > Read analysis

Damages actions for competition law infringements: clarification of the temporal scope of the rules

Clarification by the Court of Justice of the European Union on the temporal application of the rules on limitation, quantification and presumption of damages for competition law infringements. > Read article

The European Commission has been accused by a German citizen of violating the European General Data Protection Regulation by awarding the hosting of the Future of Europe Conference’s website to Amazon Web Services. When registering to the platform, the personal data provided may be transferred to the United States, where Amazon headquarters are located. A complaint has been filed against the European Commission before the Court of Justice of the European Union, which has agreed to investigate the complaint and should decide within 12 to 18 months.> Read article

Simplification of the legal framework, exemption from criminal liability, better coordination of litigation, a future authority responsible for the duty of vigilance and the creation of a new legal profession are the measures requested by six compliance specialists. > Listen to podcast

Highlight on the disclosure obligations imposed on interest representatives in France, as provided for by Law 2013-907 of October 11, 2013, as amended by Law 2016-1691 of December 9, 2016, on transparency, the fight against corruption and the modernization of economic life, as well as the possible penalties for failure to comply with these obligations. > Read analysis

A new deferred prosecution agreement in environmental matters is an opportunity to review the creation of this new mechanism serving French environmental criminal law, but also to consider its future and prospects. > Read analysis

Transfer of criminal liability following a merger or acquisition

In a ruling of April 13, 2022, the Court clarified the nature of the control that must be performed by judges on prosecutions against absorbing companies after its historic decision of November 25, 2020, regarding the transfer of the criminal liability of corporate entities. > Read analysis

The cumulation of criminal and administrative sanctions in tax fraud

The judges of the Court of Cassation recently ruled on the cumulation of criminal and fiscal sanctions in tax fraud cases. This decision confirms the case law which permits the cumulation of penalties for the most serious frauds. > Read analysis

Homologation of a guilty-plea procedure: no appeal is possible against a decision of denied in the absence of a misuse of powers by the judge

The criminal division of the Court of Cassation has stated that a judge’s refusal to approve a second sentence proposed by the Public prosecutor does not constitute a ground of appeal. In fact, the Court confirmed its position according to which an appeal cannot be lodged against the refusal of a guilty-plea procedure if the judge did not exceed his powers. > Read analysis

The first activity report of the European Public Prosecutor’s Office for 2021 presents its promising beginnings and emphasizes on its internal organization as well as its investigation methods, which appear simplified and effective. Although the investigations carried out by the European Public Prosecutor’s Office only report seven months of activity, it already seems that it is a key player in prosecutions at European level. > Read analysis

The fight against corruption in sport: the French Anti-Corruption Agency (AFA) and the French Ministry of Sports publish two practical guides

After two years of collaborative work, the French Ministry of Sports and the French Anti-Corruption Agency have published this week two comprehensive guides to prevent and detect integrity violations in sports and sporting events. One for sports federations and the other for the operators of the Sports Ministry and the Olympic and Paralympic Games. The guides are complete and illustrated with standard scenarios. France is taking on a subject that is stirring up the world of sport, particularly with the soccer World Cup being organized this year in Qatar. > Read article

The right to silence is a constitutional principle in criminal proceedings. However, it turns out that this principle can be restricted in the context of investigations that are not carried out by judicial authorities. Navacelle reviews a decision of the CJEU establishing a right to silence in the context of insider trading proceedings. > Read analysis

In several rulings handed down on July 12, 2022, the Court de Cassation interpreted the law governing national criminal procedure in light of European Union law with respect to the legality of general and undifferentiated retention of connection data, the lack of jurisdiction of the public prosecutor to authorize access to connection data, the use of connection data in the fight against serious crime, and the rapid retention of traffic and location data (Cass. crim., 12 juillet 2022, n° 21-83.710, 21-83.820, 21-84.096 et 20-86.652). > Read article

Press review – Week of 17 October 2022
In this press review you will find two significant events: (1) Lafarge pleads guilty in the United States for providing...
Publication
Jurisdiction and powers of international arbitral tribunals when dealing with allegations of corruption
Stéphane de Navacelle and Juliette Musso discuss the issues of jurisdiction and powers of international arbitrators when faced with allegations...
Press review

Press review – Week of 19 September 2022
In this week's press review, you will discover the criminal initiatives at the European Union level announced by the President...
Press review

Press review – Week of 5 September 2022
In this press review you will find two cases regarding the criminal prosecution of foreign nationals. First, the review addresses...
Analysis

Transposition of the European Whistleblowers Directive: Towards a reinforcement of the French protection system
The text of the law aimed at improving the protection of whistleblowers, drafted by the Joint Committee, was approved by...
Analysis 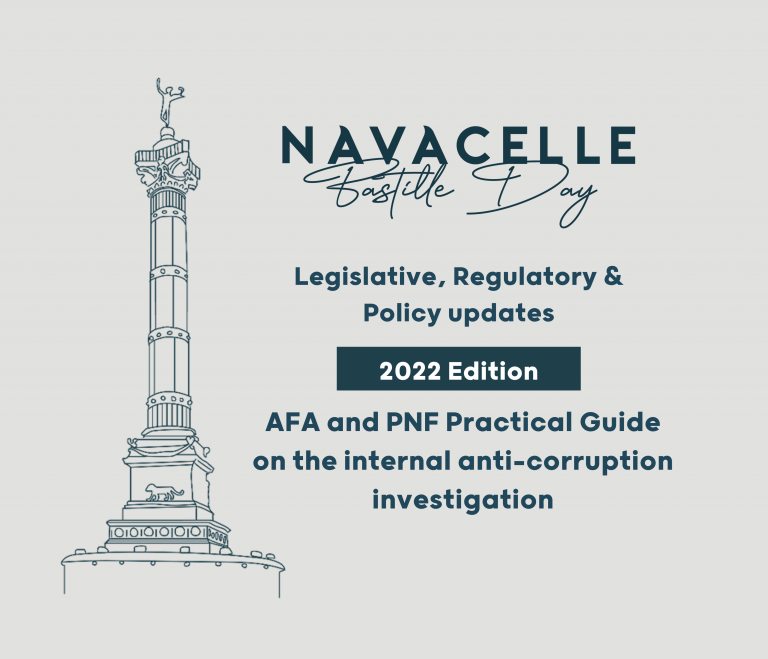 AFA and PNF Practical Guide on the internal anti-corruption investigation
The internal investigation, as a modulator in the detection of corruption or influence peddling, represents a fundamental tool for the...
Analysis 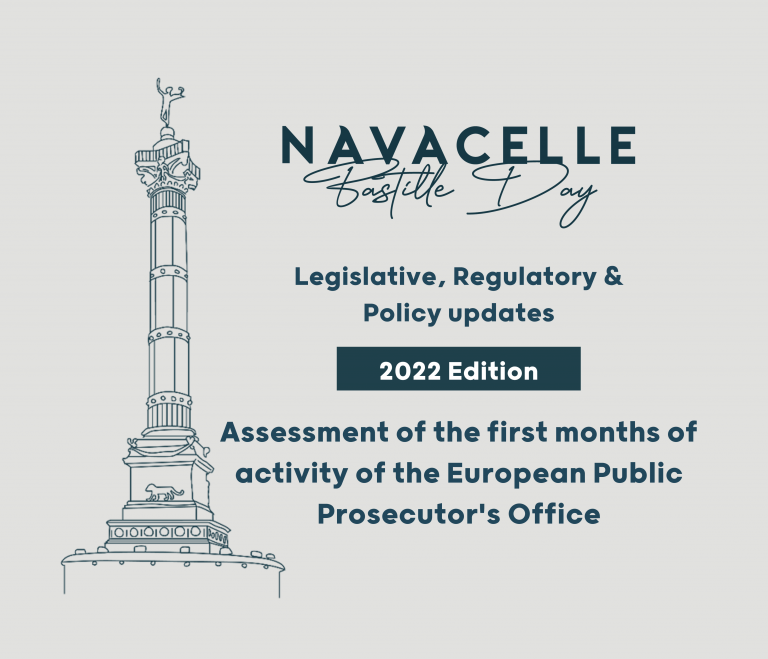 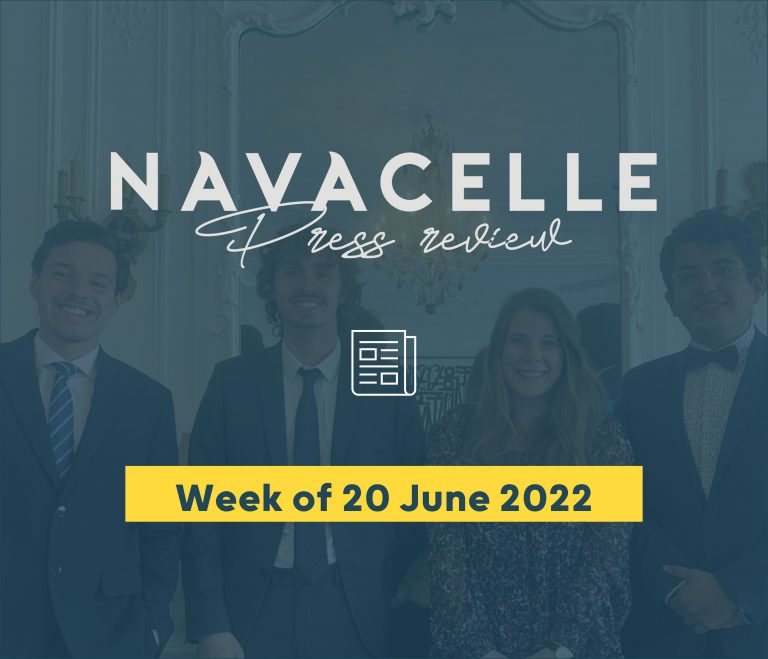 Press review – Week of 20 June 2022
In the press review you will discover the new article of the French criminal code harmonizing the repression of “prise...
See all news and insights
Manage Cookie Consent
We use cookies to optimize our website and our services.
Manage options Manage services Manage vendors Read more about these purposes
Settings
{title} {title} {title}